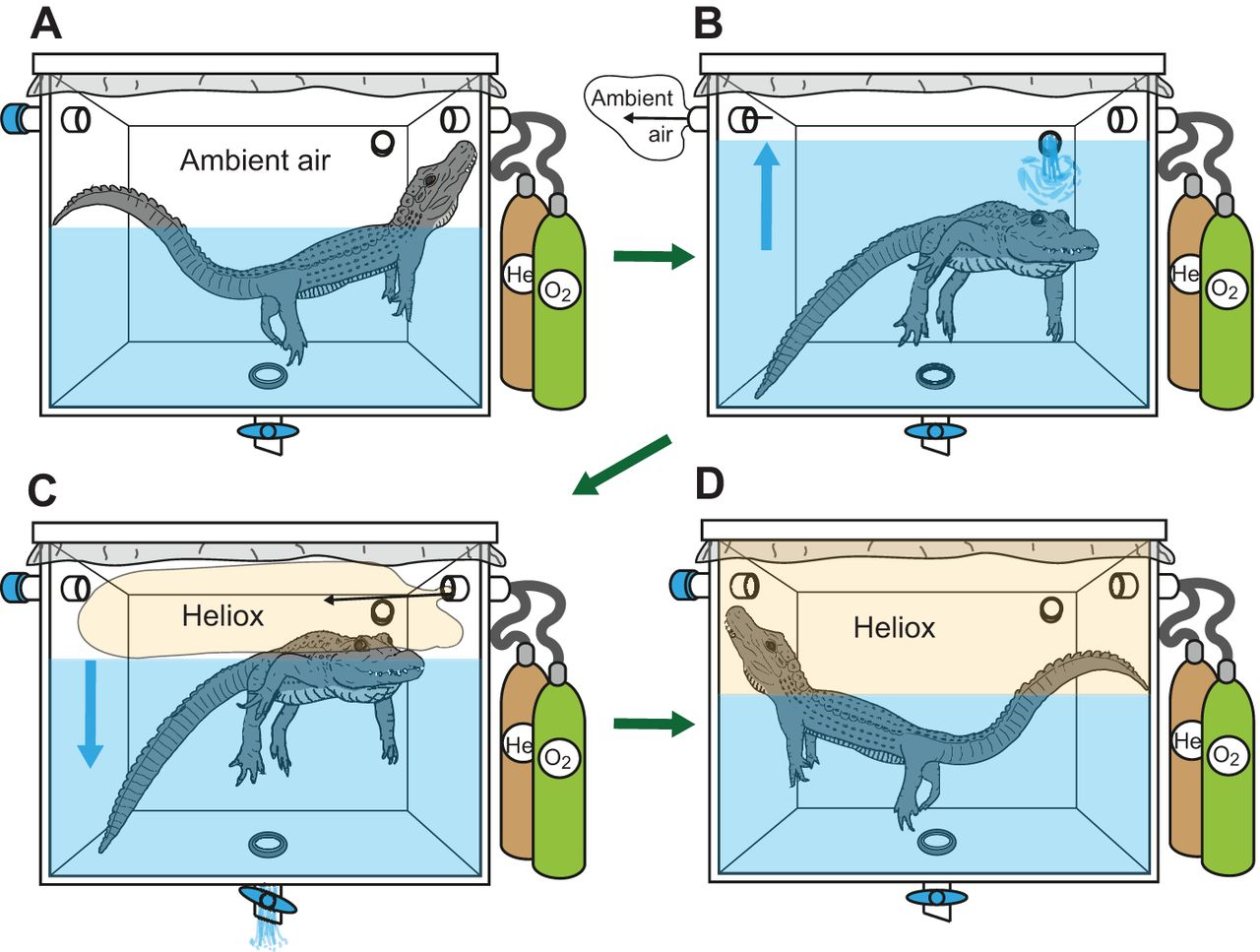 Crocodilians are among the most vocal non-avian reptiles. Adults of both sexes produce loud vocalizations known as ‘bellows’ year round, with the highest rate during the mating season. Although the specific function of these vocalizations remains unclear, they may advertise the caller’s body size, because relative size differences strongly affect courtship and territorial behaviour in crocodilians. In mammals and birds, a common mechanism for producing honest acoustic signals of body size is via formant frequencies (vocal tract resonances). To our knowledge, formants have to date never been documented in any non-avian reptile, and formants do not seem to play a role in the vocalizations of anurans. We tested for formants in crocodilian vocalizations by using playbacks to induce a female Chinese alligator (Alligator sinensis) to bellow in an airtight chamber. During vocalizations, the animal inhaled either normal air or a helium/oxygen mixture (heliox) in which the velocity of sound is increased. Although heliox allows normal respiration, it alters the formant distribution of the sound spectrum. An acoustic analysis of the calls showed that the source signal components remained constant under both conditions, but an upward shift of high-energy frequency bands was observed in heliox. We conclude that these frequency bands represent formants. We suggest that crocodilian vocalizations could thus provide an acoustic indication of body size via formants. Because birds and crocodilians share a common ancestor with all dinosaurs, a better understanding of their vocal production systems may also provide insight into the communication of extinct Archosaurians.

In many vertebrates, long-distance vocalizations convey cues to a caller’s physical attributes, such as body size (Hardouin et al., 2007, 2014; Harris et al., 2006; Vannoni and McElligott, 2008). In mammals, formant frequencies (vocal tract resonances) represent a widespread mechanism for producing such honest acoustic signals (Charlton et al., 2012, 2011; Fitch and Hauser, 2002; Reby et al., 2005). Formants are often negatively correlated with a caller’s vocal tract length and hence its size (Fitch, 1997; Reby and McComb, 2003; Riede and Fitch, 1999). Bird vocalizations possess formants (Nowicki, 1987) and although they have several functions, it is thought that in at least some species they can serve (Fitch, 1999; Hinds and Calder, 1971; Jones and Witt, 2014; Miller et al., 2007) and be perceived as honest signals of body size (Budka and Osiejuk, 2013; Fitch and Kelley, 2000). However, there is little evidence for formants in anurans (Rand and Dudley, 1993), and to date formants have not been shown to play a role in the vocalizations of non-avian reptiles.

Crocodilians are among the most vocal non-avian reptiles (Britton, 2001; Campbell, 1973), and adults of either sex produce loud vocalizations, called ‘bellows’, year round with the highest occurrence during the mating season (Vergne et al., 2009). It has been suggested that bellows serve as advertisement calls, carrying cues to sex and size (Garrick and Lang, 1977). In all extant crocodilian species, relative size differences strongly affect both courtship and agonistic behaviour. Females only accept males larger than themselves as mates (Brazaitis and Watanabe, 2011), and size reliably predicts the outcome of agonistic interactions (Tucker et al., 1998; Webb et al., 1983). Accurate acoustic cues to body size would facilitate several aspect of crocodilians’ social behaviour, because both sexes compete over breeding grounds and mates (Garrick and Lang, 1977). In some crocodilian species, bellow displays differ between sexes; for example, in American alligators (Alligator mississippiensis), only males appear to exhibit sub-audible vibrations (visible by the ‘water dance’) before the audible bellow (Vliet, 1989). Additionally, bellowing seems to stimulate equivalent vocal responses in other conspecifics and to attract individuals towards the sound source (Wang et al., 2009b). Finally, bellows are rather noisy vocalizations with a broad energy spectrum (Garrick and Lang, 1977), which would make these calls well suited to indicate size with formants.

No study to date has demonstrated that crocodilian bellows exhibit formants; indeed, the existence of formants has not been demonstrated in any non-avian reptile. A powerful method to identify the presence of formants is to compare an animal’s vocalizations produced in the atmosphere conditions of ambient air and heliox, a helium/oxygen mixture (Herrsch, 1966; Madsen et al., 2012; Nowicki, 1987; Rand and Dudley, 1993; Roberts, 1975). Because helium is lighter than air, the speed of sound is higher in heliox, shifting resonances in a gas-filled cavity upward in frequency (Koda et al., 2012). Although heliox allows normal respiration, it sharply alters the distribution of formants in the sound spectrum (Beil, 1962). In contrast, frequency bands produced by the sound source (e.g. vocal fold or other tissue vibrations) will remain unchanged in the two conditions. The heliox method can thus clearly disentangle the independent contributions of the source and the filter to the acoustic output (Fant, 1960; Holywell and Harvey, 1964). The two are currently not known to be coupled in vertebrate vocalizations. By means of the heliox method it was shown, for example, that the vocal sac of four species of anurans does not act as a cavity resonator (Rand and Dudley, 1993) and that source characteristics do not shift frequency appreciably in heliox in humans (Beil, 1962), gibbons (Koda et al., 2012), bats (Hartley and Suthers, 1988; Roberts, 1973) or birds (Brittan-Powell et al., 1997; Gaunt et al., 1987; Nowicki, 1987).

In this study, we sought evidence for formants in crocodilians by comparing bellows produced in air and in heliox by a female Chinese alligator (Alligator sinensis Fauvel 1879). As relatively small but highly vocal crocodilians, Chinese alligators are well suited for such experiments (Garrick, 1975; Wang et al., 2009a, 2007). We induced our subject (total length 125 cm) to bellow in an airproof chamber using playbacks of its own vocalizations. The alligator breathed either ambient air or heliox (88% helium, 12% oxygen). We calculated the speed of sound for these two gas mixtures and estimated the subject’s vocal tract length using the externally measured head length (16 cm). Based on these values, we performed an automated acoustic analysis of the recordings. Our aims were (1) to identify a source signal, which should remain unchanged in the two conditions (Taylor and Reby, 2010), and (2) to determine whether the calls contained formant frequencies, which should be significantly altered in the two different atmospheres.

Playbacks were highly effective in inducing bellowing in our subject: typically a bout of two call playbacks elicited a bellowing response. The animal bellowed in every section of the experiment on two testing days. For all analysis steps, the recordings from these 2 days were pooled and compared by atmosphere treatment.

Source signal, intensity and duration
Bellows of Chinese alligators are relatively chaotic vocalizations with very little harmonic signal, and the fundamental frequency could not be measured with confidence. However, the bellows do typically show a pulsed structure around 35 Hz, which was visible in the spectrogram. We automatically extracted the temporal intervals between these pulses using the Praat acoustic analysis program (version 5.2.45, www.praat.org). Calls in which Praat could not identify the targeted pulses were excluded from the analysis (causing a reduction in sample size). The mean period (in s) between the pulses in a call was used to calculate the pulse frequency. This measurable component of the source signal did not change between bellows produced in ambient air or heliox (exact Wilcoxon rank-sum test, Nair=43, Nheliox=47, Z=−0.064, P=0.949). We also extracted the frequency with the highest amplitude in the spectrum, the dominant frequency, from each recording as an additional potential indicator of the source component of the acoustic output. The dominant frequency remained essentially constant in all bellows recorded, and the values did not differ significantly between the two conditions (Nair=58, Nheliox=68, Z=−0.405, P=0.686). No differences were found between bellows in air and heliox for relative intensity (Z=−1.072, P=0.284) or call duration (Z=−0.818, P=0.414).