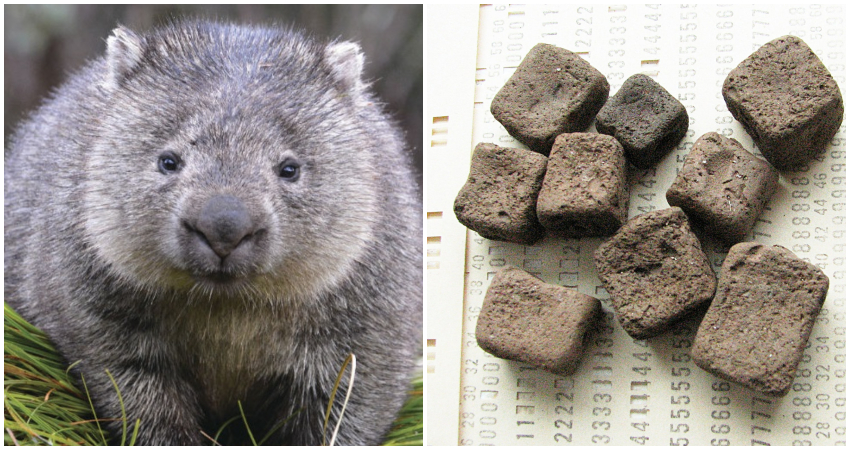 Looking like the lovechild of a bear and an otter, the wombat is a marsupial that can grow to be 40 inches (about 1 meter) long and weigh as much as 77 pounds (35 kg). It can reach up to 25 miles per hour (40 km per hour) when threatened, meaning that like everything else in Australia, the wombat would also like to kill you and could, given the right circumstances. Their poop is a cube… And they can poop as many as 100 times a night. The square shape is actually important, because they use their droppings to mark their territory, and the cube shape keeps it from rolling away.

Wombats are fossorial herbivorous marsupials with the distinctive feature of producing cubic feces, which is unique in the animal kingdom. In the built world, cubic structures are created by extrusion or injection molding, but there are few examples of this feat in nature. We investigate how wombats produce cubic feces, through investigation of the structure and mechanics of two dissected alimentary systems of wombats–derived from veterinary euthanized individuals following motor vehicle collisions in Tasmania, Australia. In the final 8 percent of the intestine, feces changed from a liquid-like state into a solid state composed of separated cubes of length 2 cm. This shape change was due to the azimuthally varying elastic properties of the intestinal wall. By emptying the intestine and inflating it with a long balloon, we found that the local strain varies from 20 percent at the cube’s corners to 75 percent at its edges. Thus, the intestine stretches preferentially at the walls to facilitate cube formation. This study addresses the long-standing mystery of cubic scat formation and provides insight into new manufacturing techniques for non-axisymmetric structures using soft tissues.