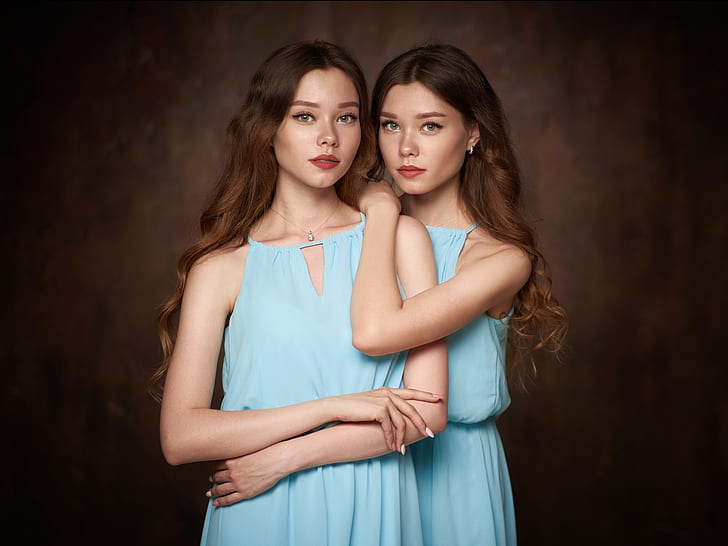 Despite the increasing interest in twin studies and the stunning amount of research on face recognition, the ability of adult identical twins to discriminate their own faces from those of their co-twins has been scarcely investigated. One’s own face is the most distinctive feature of the bodily self, and people typically show a clear advantage in recognizing their own face even more than other very familiar identities. Given the very high level of resemblance of their faces, monozygotic twins represent a unique model for exploring self-face processing. Herein we examined the ability of monozygotic twins to distinguish their own face from the face of their co-twin and of a highly familiar individual. Results show that twins equally recognize their own face and their twin’s face. This lack of self-face advantage was negatively predicted by how much they felt physically similar to their co-twin and by their anxious or avoidant attachment style. We speculate that in monozygotic twins, the visual representation of the self-face overlaps with that of the co-twin. Thus, to distinguish the self from the co-twin, monozygotic twins have to rely much more than control participants on the multisensory integration processes upon which the sense of bodily self is based. Moreover, in keeping with the notion that attachment style influences perception of self and significant others, we propose that the observed self/co-twin confusion may depend upon insecure attachment.

Thirty participants were recruited for this study: 10 monozygotic, right-handed, gender-balanced, healthy twin couples (mean age ± SD: 21.4 ± 1.8 years, range 18–23) and 10 right-handed, gender-balanced, healthy controls (mean age ± SD: 22.5 ±3.8 years, range 20–32). All subjects belonged to the same race (white-Caucasian). Each control participant was a sex-matched, close friend (n = 8) or relative (n = 2: 1 cousin and 1 brother) of a given twin pair. Each control participant had known the twins in the relative pair for at least 3 years (mean relationship duration = 14 years) and had daily interaction with them (on average 9 controls regularly met the twins 7 days per week, while 1 control met them 5 days per week).

The twins were recruited from the “National Twins’ Register” of “Istituto Superiore di Sanità (I.S.S.)” of Rome. Zygosity was previously determined by the I.S.S. through a standard interview process that has proved to be highly reliable [55].

Before starting the experiment, participants signed an informed consent and received a monetary compensation at the end of the task. The procedures were approved by the local ethics committee of Fondazione Santa Lucia and were in accordance with the ethical standards of the Declaration of Helsinki. The individuals in this manuscript have given written informed consent (as outlined in PLOS consent form) to publish these case details.

Upright and inverted (180°) faces were created for each identity. Thus, each participant was presented with three identities (TWIN group: Self, Twin, Friend; CONTROL group: Self, Friend-1 (i.e. one of the twins), Friend-2 (i.e. the other twin)) and two orientations (upright; inverted; see Fig. 1A). Self-face pictures were presented as mirror images; that is, in the way subjects were used to seeing themselves in mirrors (flipped left-right). Digital manipulations were performed with Photoshop 6.0 (Adobe Systems Incorporated, San Jose, CA, USA). On the second day, subjects performed the recognition task and completed the various questionnaires.

Overall our results reveal that, at least for the rapid stimuli presentation used in our study, monozygotic twins do not show the visual self-face recognition advantage. It is important to note that twins lack a self-face advantage with respect to the co-twin’s face and that it is highly plausible to find facilitated self-face recognition if the self-face is compared to other non-twin faces.

We hypothesize that such lack of self-advantage may depend on overlapping visual representation of the self- and the highly self-similar co-twin face. Indeed, the effect varies as a function of perceived physical resemblance. Furthermore, the inability to discriminate the self from the co-twin is related to insecure attachment styles, which defines perceptions and the beliefs about self and significant others.

We have to acknowledge that the current study was also not free of limitations: given the high specificity of the study population, the sample size was limited. Also, although we did our best to match twins and controls in sex, age and every day frequentation, some of the controls did not know the twins from birth. Therefore, future studies may take into account these factors to further control the possible role they play in face recognition in identical twins.